The Mini-32 board from MikroElektronika is a development board for PIC-32 microcontrollers. It has 40 pins and the footprint of a 40-pole DIL package. This characteristic is especially interesting for building prototypes on breadboards. Another advantage is, that MikroElektronika already integrated a bootloader which ensures flashing without the need for a programmer such as a PICKIT 3.

The Board made a good impression on me and so I ordered it immediately. Unfortunately I only examined the hardware preferences and didn’t think about the compatibility with Microchips MPLAB. After the arrival of the Mini-32 I promptly tried to create my first project in MPLAB. No matter which configurations was used in MPLAB I didn’t get this board working. The software was not executed by the microcontroller.

.Of course I tried to find the error, additionally with the help from the forums of MikroElektronika as 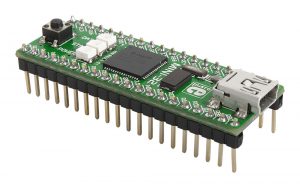 well as the EEVblog. In the meantime I tried to program the board with the help of the IDE from MikroElektronika. To my surprise – it worked without any problems.

I found out that MikroElektronika do not offer any support for their hardware products if they are used with software from other vendors. Due to the fact that the written program worked in MPLAB with the internal simulator without errors I assumed that there is a problem with the memory allocation. Maybe the memory addresses in MPLAB differ from that set in the bootloader which led to an incompatibility of the two. Changing the memory allocation in MPLAB so that it suits the bootloader was too much work for me. Moreover, I decided to not longer use the board. The next logical step would have been to use the IDE from MikroElektronika. Unfortunately this is not possible for me because they do not offer their software for MAC OS X and I didn’t want to program in a virtual machine.

In my opinion, development boards should be used to examine the relevant µC or micro controller family to develop application specific PCBs as a next step with these controllers. Microchip offers a very powerful tool with MPLAB to develop many different projects. The fact that the board is not compatible with MPLAB makes it useless for me. One possibility to still use the board is to program it with a programmer/debugger like e.g. the PICKit 3. A good alternative to the Mini-32 is the Microstick 2 Board from Microchip. It serves nearly the same needs but is compatible with MPLAB because it is developed directly by Microchip.

This site uses Akismet to reduce spam. Learn how your comment data is processed.